The Bothnian Corridor connects north and south,
east and west!

Do you want to reach all parts of the EU? Do you want to visit the Arctic, without emissions? Then you should support the Bothnian Corridor!

The Bothnian Corridor is a strategically important link within the transnational transport system of goods in Northern Europe.

It stretches out on both the Swedish and the Finnish side of the Bothnian Gulf. It connects east-westbound and north-southbound transnational links in Sweden, Finland, Norway and Russia.

Geography of the Botnian Corridor

The Bothnian Corridor at the Swedish side, covers more than 2/3 of Sweden, from Stockholm and Örebro up to the border to Finland in Haparanda/Torneå and the border to Norway in the west, in practice to the port of Narvik. The estimated length of the railway parts of the Bothnian extension is 1,917 km. Now – from 2021 – added to the  Scand-Med length in Sweden of 3,379 km and the total Scand-Med CNC length of 9,373 km.

The railway infrastructure in the Bothnian Corridor comprises several main railway stretches with various standards. The newest sections are the Bothnia Line and the Haparanda Line. The North Bothnia Line is planned to be built between 2018-2030. For the East Coast Line and Malmbanan Line there are continuous work for increased capacity, but both need double track, due to capacity constraints.

Even though the infrastructure of the Bothnian Corridor and the extension of the Scand-Med CNC is at the east coast, the catchment area for the corridor is considerably larger. The inland region of Jämtland-Härjedalen has a vast amount of natural resources and is one of the most prosperous tourist regions in Sweden. Through this region are also the Mittbanan Line, which is the connection between the Bothnian Corridor and the Trondheim area in Norway.

Since 2014 the Bothnian Corridor at both sides of the Bothnian Gulf is included in the TEN-T Core Network and in the CEF regulation because of its importance for the industry in the middle and north of Sweden and northern Finland and for the rest of Europe.

There are continuous developments of the Bothnian Corridor, for all modes of transports, and there have been a number of TEN-T and CEF funded studies and investments, e.g. for railway planning and investments in ERTMS at several of the lines. In addition, there have been numerous planning, development and investments projects of with co-funding from European Regional Development Fund and Interreg programmes. Some of these projects have included collaboration with Norway and Finland and other EU member states. 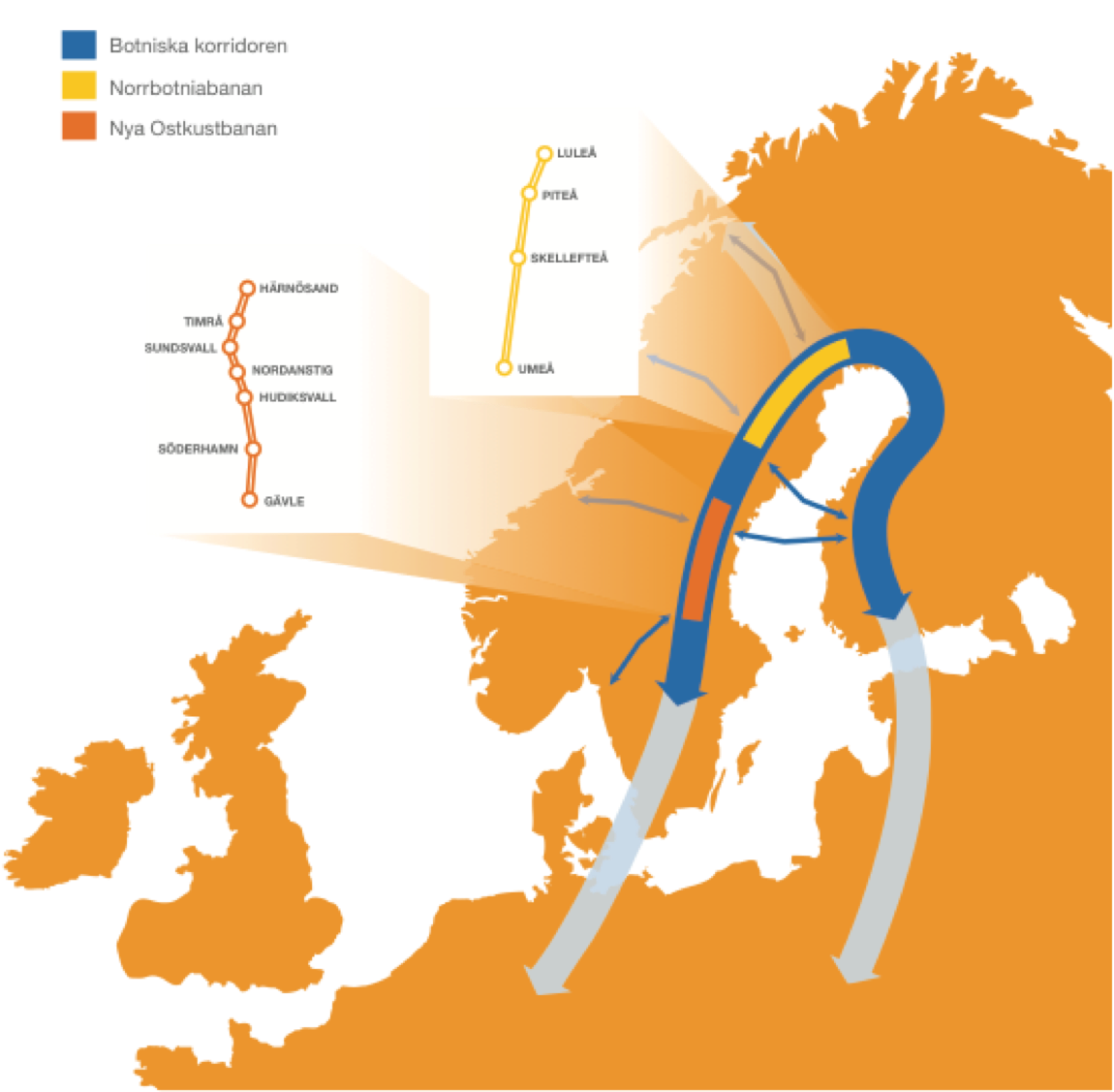 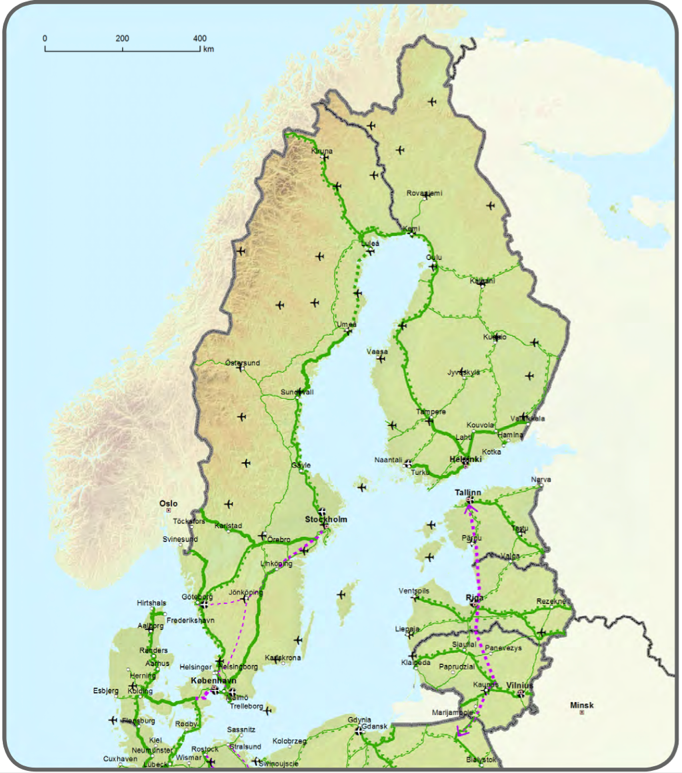 With the European green deal, Paris Agreement and Climate law in Sweden there is strong support for reduced emissions. That require more rail. Therefore are investments in the Bothnian Corridor a smart climate action!

Vital part of the value chain

The supply of raw materials are an vital part of the value chain within the EU. A large part of the supply comes from Northern Europe. That’s why Botnian Corridor is a part the TEN-T Core Network!

Growth for all EU members – everywhere

Sweden is a large and sparsley populated area but at the same time innvation leaders with world leading industry. With good connections for both people and goods, Northern Europe can continue to support the EU and Swedish economy and growth.

The northern parts of Sweden are perfect for fast rain connections. The cities sits like a string of pearls along the corridor. With the infrastructure in place, it will take around one hour between city centres. Perfect for both commuters and visitors.

The multimodal dimensions of the Bothnian Corridor

Even though the core backbone of the Bothnian Corridor is the railway infrastructure the multimodality and linkage between different modes of transport is extremely important, which is illustrated with a few examples:

In some areas raw material from forests and mines have to be transported by trucks to a rail-road terminal, to a port or to an industry, because of the absence of railways and that the transports start in remote forestry or mining areas.

In some cases, truck transports even of heavy goods at longer distances is chosen because the intermodal infrastructure is not sufficient, too expensive or time consuming to use. This is the case at the border-crossing in Haparanda and Torneå where investments are needed for handling the difference between track gauges.

The ports in the Bothnian Gulf are all extremely important for large amounts of outbound and inbound cargo that is more efficiently and environmentally friendly transported by sea. For the many wood, paper and pulp industries it is common practice to use a combination of rail and sea transport for the export products.

The ports are all but Luleå comprehensive ports with volumes between 1-3 Million tonnes per year. They are all important especially for the out-shipping of export goods from the industries and for avoiding congestion at the single-track railways in the northernmost part of the Bothnian Corridor. The ports should therefore be considered as an integrated essential part of the Bothnian extension of the Scand-Med Corridor.

The ferry connection between the ports of Umeå and Vaasa is of essential importance for the Bothnian extension since this will be an interconnection between the Scand- Med CNC and the North Sea-Baltic CNC. The cargo volumes are increasing at this route and are expected to increase further with a new LNG ferry in 2021.

There is a modal imbalance in the Bothnian corridor in the north-south direction in the sense that train and sea transports are used for the heavy cargo produced in the region, while for the consumption goods mostly trucks are used. This results in a situation where train sets and ships are not fully utilised in the north-bound direction and trucks are empty or half empty in the southbound direction. This situation is seriously affecting both the cost-efficiency and the environmental impact of the transports in the corridor.